THE SPY IN THE HANOI HILTON 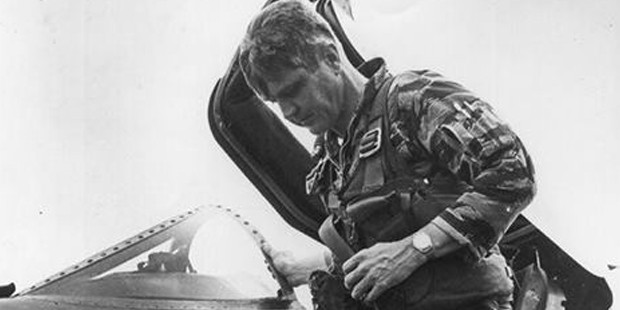 Tortured POWs Had Direct Communication with The Pentagon and President Nixon

A new Smithsonian Channel special will reveal one of the greatest secrets of the Vietnam War. THE SPY IN THE HANOI HILTON, premiering Monday, April 27 at 8 p.m. ET/PT, uncovers the true story of POWs inside the H?a Lò Prison, known as the Hanoi Hilton, who created a high-level espionage operation that reached all the way to the CIA and the White House. This included sending radio transmissions to the Pentagon and President Nixon’s White House during the brutal Christmas Bombings of 1972, signaling that POWs inside the Hanoi Hilton were still alive and that the raid should continue.

The spy network was led by James Bond Stockdale, an air-wing commander who was shot down on a bombing mission into North Vietnam on Sept. 9, 1965. He was one of the two most senior-ranking U.S. Navy officers imprisoned in the Hanoi Hilton. Stockdale later rose to the rank of Vice Admiral, became one of the most highly decorated officers in the history of the Navy, and ran for Vice President. He was also awarded the Medal of Honor for his secret communication network and for bravery in the face of torture. Former CIA official Robert Wallace calls Stockdale’s spy network “one of the most significant activities in Agency history.”

When the POWs were released from Vietnam in 1973, each was told that the espionage network must remain a secret forever. Now, THE SPY IN THE HANOI HILTON reveals the true story, classified for 40 years, about the network that linked tortured Americans inside North Vietnam directly to the Pentagon. Using coded letters, secret writing, a technique called “microdots” and clandestine radio transmissions, the POWs inside the Hanoi Hilton were able to report on conditions, suggest military activities and bombing raids, and signal two of the largest rescue operations of the entire Vietnam War.

The network began with a single letter from Stockdale to his wife, Sybil. “After months and months in solitary confinement and realizing his prison mates were being treated very brutally, he was looking for some way to overcome the inevitable depressions that come with solitary confinement,” Stockdale’s son, Jim, reveals in the film. Sybil realized that her husband had sent her a coded message and made contact with Naval Intelligence and the CIA. She then faced the difficult decision of whether to support the idea of her husband transitioning from POW to spy. Prisoners may be tortured, but as former CIA official Wallace puts it, “spies get executed.”

Sybil’s return letter to her husband included carefully concealed invisible carbon paper and a coded message from the Pentagon. Stockdale used his subsequent letters to provide coded reports describing brutal torture at the hands of the North Vietnamese, as well as a complete list of the American POWs in Hanoi. That was just the beginning of an espionage operation that would grow to astonishing complexity and capability. Commander Stockdale enlisted other POWs to send coded letters, eventually bringing dozens of men into his spy network, including Captain Eugene “Red” McDaniel, who spent six years in the H?a Lò Prison.

Said Captain McDaniel, “I was not trained in covert communication but some of my cellmates were. And from them they taught us. We did that as a lifeline. And so we knew that the U.S. knew what was happening in that camp.”

Soon, Commander Stockdale and his crew were recommending bombing targets and the timing of attacks. Eventually, the spy network included microfilm, microdots — which concealed a full sheet of information in the size of a period —and even radio transmissions sent to drones high over Hanoi.

In 1970, the POWs helped engineer the So’n Tây Raid, also known as “Operation Ivory Coast.” Attack helicopters filled with American Special Forces descended on the So’n Tây prison camp to free the POWs. Unfortunately, the POWs had already sent coded messages that the camp had been abandoned, but the letters were decoded too late.

In 1972, another POW rescue mission was planned through the secret communication network. “Operation Thunderhead” involved a submarine, a Navy cruiser, helicopters and a team of Navy SEALS, who would rendezvous with escaping POWs at the mouth of the Red River. The signal to begin the escape was two sonic booms from SR-71 spy planes over Hanoi – a sign from Washington that President Nixon himself supported the escape plan. The escape attempt was called off at the last minute as too dangerous. The rescue mission resulted in the death of Navy SEAL Spence Dry. The official reason was kept a classified secret for the next 30 years. In 2008, Admiral Mike Mullen, then the Chairman of the Joint Chiefs of Staff, posthumously awarded a Bronze Star to Dry for his role in the secret mission.

Among those interviewed in THE SPY IN THE HANOI HILTON are:

Smithsonian Channel™, owned by Showtime Networks Inc. and the Smithsonian Institution, is where curiosity lives, inspiration strikes and wonders never cease. This is the place for awe-inspiring stories, powerful documentaries and amazing entertainment across multiple platforms. Smithsonian Channel combines the storytelling prowess of SHOWTIME® with the unmatched resources and rich traditions of the Smithsonian, to create award-winning programming that shines new light on popular genres such as air and space, history, science, nature, and pop culture. Among the network’s offerings are series including Aerial America, Million Dollar American Princesses, Secrets, Mighty Ships, Mighty Planes and Air Disasters, as well as critically-acclaimed specials that include Civil War 360, 9/11: The Heartland Tapes; MLK: The Assassination Tapes and The Day Kennedy Died. Find out more at www.smithsonianchannel.com .