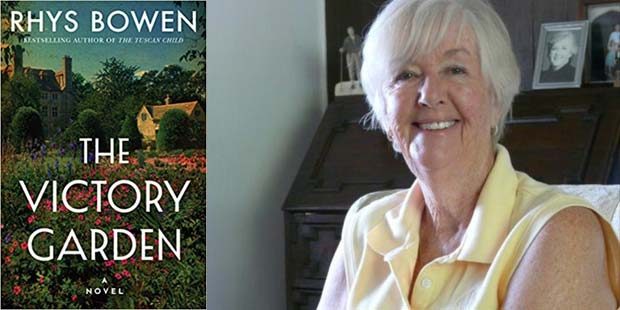 “The Victory Garden” by Rhys Bowen brings to life women’s roles during World War I. As with her other historical novels she beautifully blends in historical facts, likable characters, and a mystery.

Emily Bryce meets Australian pilot Robbie Kerr while she volunteers to pass out cookies to those wounded in battle. She is not allowed to sit and talk to the young men or write letters for them, and can only serve buns from silver trays with crystal tongs. It is against the rules to talk to the men other than pleasantries.

But Kerr has other ideas, and, as an Australian, he is willing break the rules. As he gets to know Emily he encourages her to become more independent. They start to become very close and after he is transferred to another hospital, she decides to disobey her parents, and join the Women’s Land Army to do something to help the home front and feel worthwhile. The extra bonus is that she will be close to Robbie until he is called upon to fight again.

Knowing that pilots in that era had only a life expectancy of six weeks, the mystery becomes whether Robbie will ever return. Meanwhile, one of Emily’s assignments is tending to the neglected grounds of a large Devonshire estate. It’s here that Emily discovers the long-forgotten journals of a medicine woman who devoted her life to her herbal garden. Emily now has a profession of sorts as well.

“I wanted to show how just 15 years before, the Wright Brothers invented the plane,” Bowen said. “It was basically paper and had fabric wings, tied together with wire. There was a high rise of crashing, not to mention the dog fights of the pilots. Remember the Red Baron was during this era. It is quite understandable there was so much PTSD among all those fighting. Those boys living in England got on a boat and crossed the Channel for an hour. Then they were in hell, knee-deep in the muddy trenches surrounded by rats. They had to endure grenades and rockets firing on them.”

Bowen also noted, “In England, the War literally wiped out a whole generation. I thought if the men were off fighting who would become the blacksmiths, carpenters, and gardeners? Of course, it was the women who stepped up. Women showed they could do tasks people thought beyond them. Those in the Women’s Land Army wore bloomers, boots, and army jackets. They threw away their corsets and cut their hair. They wanted to show women were no longer subservient. Also, class barriers broke down for those women in the WLA. Normally, people Emily worked with would not have been those she associated with. Yet, the cockney girl, those raised on farms, and Emily, a middle-class girl, all became friends and had incredible support for each other They came through beautifully. After the war, because ten million young men died, many of the women remained in jobs because the men were not coming home. It was shortly after WWI that women in England were given the vote.”

Interestingly, the contrast between women at the home front versus women on the warfront shows how society was changing. Many women have taken jobs once denied to them, replacing the men fighting. Clarissa Hamilton is an example of an aristocrat who had taken on a very intense job, becoming a nurse and directly tending to those wounded on the battlefront. Emily, living in England, had to wait until she turned twenty-one because during that era parents controlled their children. But once that age, Emily contributes in her own way to the war effort.

This story is informative and readers take a journey with Emily. They see her grow from someone solely dependent on her parents both financially and emotionally to a headstrong woman who is determined to make a life of her own.