There is Terror with COME PLAY 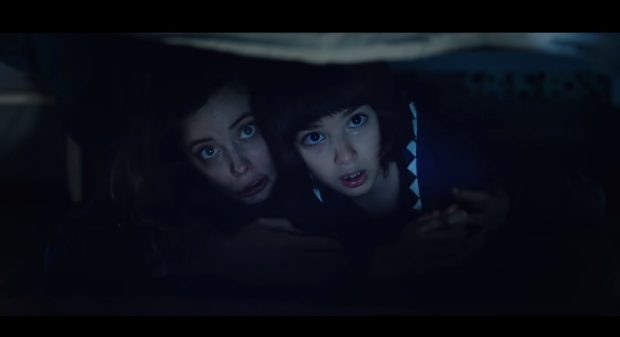 Coming to Bluray, DVD and currently on Digital from writer/director Jacob Chase Universal Pictures Home Entertainment is the unbelievable way it asks them to COME PLAY.

Oliver (Azhy Robertson) just wants a friend and so he turns to electronic devises to keep him occupied. Unable to speak, he also uses the devises to communicate with his mother Sarah (Gillian Jacobs) and dad Marty (John Gallagher Jr.). One day he discovers a story about a monster named Larry that also wants a friend.

The problem is that this particular story-book friend has evil intention. Using electricity, Larry can travel and wreak deadly havoc on their lives. Oliver begins to understand how Larry works and tries to share with his parents through drawing how it is all happening.

Believing that becoming device free would save them, Larry learns quickly what he must do to finally have the friend he is dying for.

Robertson as Oliver is a young man dealing with several issues. Recently losing a friend because of a misunderstanding, Oliver goes deeper inside himself. Using devices to communicate is necessary if his parents are going to help him. Once he discovers Larry, he begins to see the result of going further and further into the story. Robertson does not need words because he is absolutely able to convey every horror emotion with his face and that’s talent.

Jacobs as Sarah is trying to keep her family together and help her son. It is when she is brought into Larry’s web of terror that she finally understands what her son has been trying to tell her. Staying on step ahead of Larry, Jacobs is fast on her feet and gives her character the tiger protecting her cub.

Gallagher Jr. is trying to understand the stress his wife is under but the problems with Oliver seem to be driving them apart. It is when he takes the opportunity to spend time with Oliver, he learns about Larry and is not about to let the creature have his son. Gallagher Jr. is a strong father but at the same time has the frailties all fathers have.

Universal Pictures Home Entertainment has just added an amazing film to their library and making it available for us to all experience and re-experience in our own home theaters. There are films of every genre available from scary to drama to family films. For more of what they have to offer please visit www.uphe.com.

COME PLAY is certainly a thriller/horror film with a creature that has come from Jim Henson’s Creature Shop. I personally think that is amazingly cool and just hearing the footsteps of Larry coming across the floor brings huge anticipation of seeing him on screen.

I enjoyed the film and writer/director Chase’s use of electronics as a mode of transport for Larry. There are many people who see electronics as becoming a horror show and I do not disagree. For Chase to wrap that feeling into a film is stellar and hugely creative. I can honestly say if something like that happened on my cell phone or Ipad – I would find the nearest woodchipper!

This is also a fun rainy evening film with the lights out and a huge tub of popcorn and I am very fond of evenings like this. COME PLAY fits everything that I want in a dark and creative horror film with intense thrills and an ending that is different yet amazing. Lights out and have fun!

In the end – he is good at taking friends!