Time for recognition: a salute to Vietnam Veterans 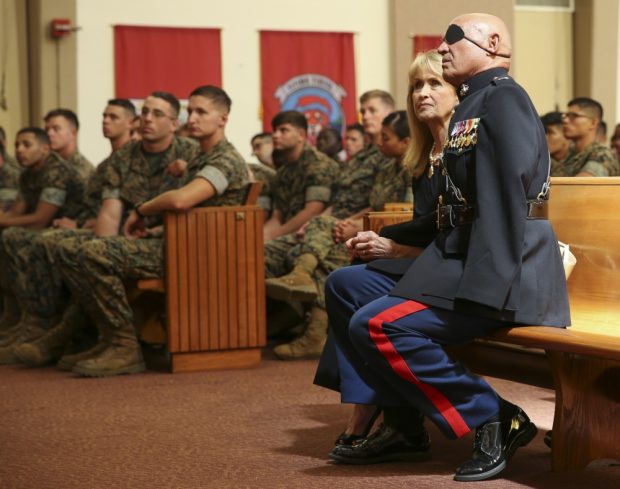 The year is 1966, the crowds are rejoicing as the University of South Carolina Gamecocks have just won their first football game of the season. As fans are running out onto the field celebrating the victory, a few spectators are burning an American flag. For a young Patrick “Clebe” McClary, a football coach at the university, the burning colors were enough to ignite the fire in his heart. At the age of 26, Clebe McClary left the university and headed to Parris Island, South Carolina, to begin his journey as a United States Marine. After stepping on the yellow footprints of Parris Island, McClary was one of seven recruits pulled due to their college education to go to Quantico, Virginia, to become an officer.

Retired 1st Lt. McClary, along with thousands of other men and women, joined during a time when our country was not only at war but was struggling with internal turmoil. American citizens were staging anti-war protests and desecrating American flags.

“The country was so torn up about the war that they couldn’t separate the veteran from the war itself, so they painted us with a pretty dark brush,” said former Cpl. Robert Waters, Vietnam veteran.

Instead of returning to parades, our troops returned home to riots and protests.

“We were told when we got off the airplane that we should change into civilian clothes,” said retired Maj. Gen. Bob Butcher, Vietnam veteran. “We were told not to wear our uniforms outside the gate because if we did, we would get spit on… It was not a pleasant experience. I was often spit at, had things thrown at me and was cursed at—but it was a job and I did it.”

These Vietnam veterans were given the worst kind of treatment when they returned home; their service and sacrifice forgotten, and for some, they had to carry the scars from war.

After half a century, these veterans are finally getting recognition for their tremendous service and sacrifice, and it is only fitting that at this year’s air show, Marine Corps Air Station Miramar and 3rd Marine Aircraft Wing honor their brothers and sisters with “A Salute to Vietnam Veterans.”

“I’m just here to thank the troops for what they have done,” said McClary, who was seriously wounded during the war, losing his left arm and left eye. “People owe them a lot but I owe them my life. If it weren’t for the young men on that hill in Vietnam and men that gave their lives, I wouldn’t be here. If it hadn’t been for an 18-year-old wife that loved me, cared for me and gave me a reason—a will to live—I’d be dead. I owe the youth of American a lot so I just try to thank them. That’s why I do what I do.”

McClary is a professional speaker and has become a symbol of courage and hope to many active-duty service member and veterans. In honor of National POW/MIA Recognition Day, McClary spoke about core values and suicide prevention at the MCAS Miramar Chapel, Sept. 15.

“If I had to do it all again, I would,” said McClary. “This country is worth living for and dying for, we aren’t perfect but we are better than anything else I know about.”