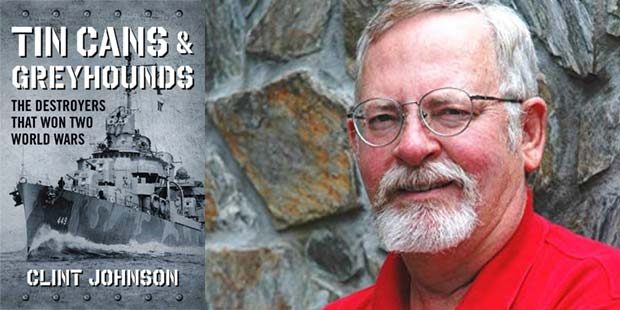 Memorial Day is a solemn holiday in which Americans should pay homage to the individuals that sacrificed their lives to protect their fellow citizens. Clint Johnson’s book “Tin Cans and Greyhounds” is a reminder that those serving on ships put their life at risk daily. This interview with Johnson reflects on Americans serving who sacrificed their lives to save others as well as a reminder that a ship sunk would have numerous loss of life.

Johnson emphasizes in his book how destroyers were nicknamed “tin cans” because they had thin, metal hulls that were useful for quickly navigating the seas but not a great protection for the soldiers that they transported, and the men serving on these ships. Their quick speeds gave them their second nickname, “greyhounds.”

Survival on a destroyer was not guaranteed. Johnson quoted Lieutenant Commander Robert Copeland as he calmly told his crew as their tiny, unarmored destroyer escort rushed toward giant, armored Japanese battleships at the Battle off Samar on October 25, 1944. Battles were waged “against overwhelming odds from which survival could not be expected.”

Compelling evidence is told by Johnson regarding the two destroyers named the USS Jacob Jones. The first ship survived an attempt of a possible crewman to sink her by opening up the sea cocks. After eventually making it to France to act as an escort convey during World War I, she was sunk on December 6, 1917 by a German U-boat off the southern coast of England.

Johnson describes how it was hit by “a single torpedo from the U-53, one of Germany’s most successful submarines, some of DD-61’s crew was killed by the initial explosion. More were killed when sinking depth charges exploded underneath the survivors floating in the water. Sixty-six out of the ninety-nine crewmen died.”

The second USS Jacob Jones (DD-130), was given the Jacob Jones ship name while still being constructed in February 1918 in honor of the destroyer that had been lost just three months earlier. On Feb. 28, 1942, while cruising off Cape May, New Jersey, she was hit by two torpedoes, fired by the U-578. Only 12 crewmen survived out of the 113 seamen and officers. What both these sinkings should emphasize is that the men lost are not numbers but fathers, husbands and sons.

Medal of Honor citation winner Elmer Bigelow of the USS Fletcher is someone Johnson wants Americans to know about.

“On February 14, 1945, off the Philippines he sacrificed his life while saving others,” Johnson said. “Refusing to waste precious time required to don rescue-breathing apparatus, he plunged through the blinding smoke billowing out of the magazine hatch and dropped into the blazing compartment. Despite the acrid, burning powder smoke which seared his lungs with each agonizing breath, he worked rapidly and with instinctive sureness and succeeded in quickly extinguishing the fires and in cooling the cases and bulkheads, thereby preventing further damage to the stricken ship. He did this act of courage knowing that he would likely die.”

He also has an interesting premise that the Japanese targeted the wrong ships at Pearl Harbor.

“Instead of bombing pre-World War I vintage battleships, the Japanese should have gone after the 55 destroyers based at Pearl.”

“The six battleships refloated at Pearl Harbor won only 32 battle stars for the rest of the war,” Johnson added. “The Pearl-based destroyers won 432 battle stars, meaning they were engaged in 432 battles. Of the 30 destroyers at Pearl during the attack, just two were destroyed. They would go on to earn 257 battle stars. Looking at the big picture, it is clear that American destroyers and destroyer escorts were the true work horses for the U.S. Navy surface fleet during World War II.”

Johnson wants Americans to understand, “with a 5/8-inch-thick hull the destroyers had basically no armor. Compare that to a battleship that has 13 inches of armor.

“The sea is unforgiving. Sailors are always in danger to be sunk by the ocean or by the enemy. When ships sink Americans should think of the individuals lost, and not just the cited number. We need to remember everything people enjoy now came about because of those who sacrificed their lives that includes the men who died on the destroyers.”