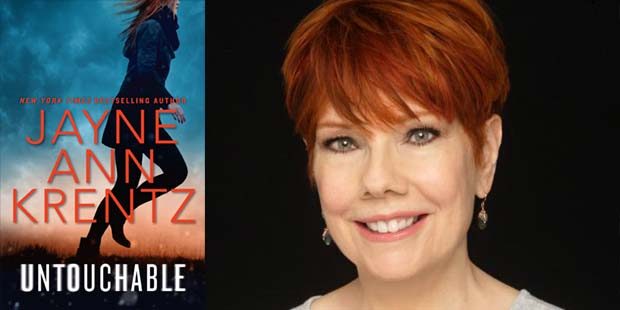 “Untouchable” by Jayne Krentz is the finale in the Cutler, Sutter and Salinas series. It intertwines a good mystery, suspense and a little romance, while delving into the world of mind control through lucid dreams and hypnosis.

“This book delves into hypnosis and lucid dreams,” Krentz said. “It is a blending of not being quite awake and being in the world. It means you are in a dream that can be controlled to some extent. Regarding hypnosis, it has been around for hundreds of years, but always has that woo-woo factor. In my research, I found it impossible to conduct a double-blind test because some people are not hypnotizable, and others are susceptible to suggestions. In this story, I took both to extremes. I also put in about sleepwalking, which is supposed to be a childhood thing that people outgrow. I think it is more of a trance-like state. I do know people who have done it and they are aware enough not to hurt themselves. I am told they just wake up in another place.”

The hero of the story, Jack Lancaster, has his mother killed in the cult fire set by Quinton Zane when Jack was 12, and since then he has been on a quest to find the murderer. His profession is related to his obsession, becoming a professor, author, and consultant on Cold Cases that have the victims killed by fire. The lucid-dreams give him the ability to be partially awake and able to manipulate them. This allows him more clarity in solving the cases he’s working on. But when his fiery dreams begin to take a disturbing turn, Jack seeks the help of Winter Meadows, his neighbor in Eclipse Bay on the Oregon coast. She is a hypnotist billed as a mediation instructor who is helping him control the dreams.

“As a writer, it is a really exciting element to work with,” the author said. “It can be destructive or useful. I like writing stories that have elements that have a dark and light side. Fire does this since we use it to heat our homes, cook our food, and chase away the monsters at night. Yet, it can tear down our shelter and can kill us. In my book, fire is the tool that is mishandled by the bad guy. In his hands, it becomes a weapon to clean up his dark past. For him, fire is a cleansing element.”

The initial bond formed between Winter and Jack comes from the connection of losing their parents to tragedy. This escalates after he saves Winter from a stalker who wants to kill her. Convinced that this has something to do with Zane he enlists the help of his father and brothers who also lost loved ones to the fire. Jack and Winter’s ensuing investigation becomes a game of cat and mouse between themselves and a criminal who always assumes he is the smartest in the room. With Winter’s assistance, Jack begins what he hopes will be his final quest to capture Zane.

“In my stories, the hero and heroine see the same virtues in each other. This attracts them to each other at first. I think before falling in love they admire each other. This is what their love is based upon. Winter and Jack understand and accept each other and never see each other as flakes. Both are gutsy, and have honor, courage, and integrity.”

This story has a unique plot and likeable main characters. The investigation is fast-paced and compelling as the foster family, assisted by the women they become romantically involved with, attempt to find and bring down the cult leader before he brings them down.