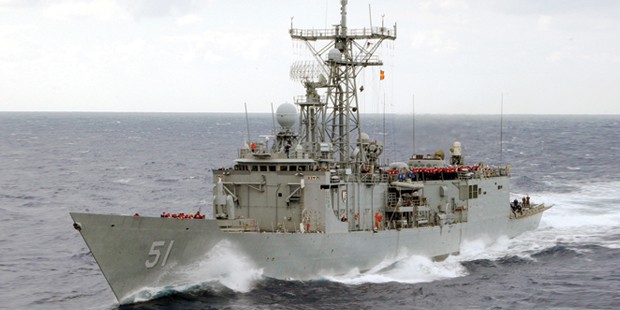 U.S. Navy frigate USS Gary (FFG 51) is scheduled to return to Naval Base San Diego April 17 from its final deployment, where it operated in the U.S. Naval Forces Southern Command/U.S. 4th Fleet and U.S. 3rd Fleet area of operations.

Operation Martillo is a U.S., European, and Western Hemisphere partner nation effort launched in January 2012 targeting illicit trafficking routes in coastal waters along the Central American isthmus. Partner nations work together to counter the spread of transnational criminal organizations, and to protect citizens in Central America from the violence, harm and exploitation created by these criminal groups.

“This has been a very successful deployment in many regards, a deployment I would refer to as a ‘strong finish’ for the last remaining west coast frigate in the fleet,” said Cmdr. Steven McDowell, Gary’s commanding officer. “When we departed for this deployment our intent was to make a difference and we did.”

While supporting Operation Martillo, Gary participated in more than 70 small boat operations and coordinated with several U.S. Maritime Patrol Aircraft (MPA) and surface units to include U.S. Navy and Canadian warships, U.S. Coast Guard cutters, and Panamanian, Colombian, Costa Rican, and Ecuadorian Coast Guard vessels in an effort to share resources and strengthen operations while reinforcing commitment to the region. The team successfully interdicted 13,921 kilograms of cocaine, with a wholesale value of $278.4 million and 18 pounds of marijuana, valued at $17,100.

“The inter-country/inter-service coordination and partnership conducted in support of Operation Martillo has been invaluable,” said Pouser. “We were able to seamlessly integrate from day one to make a solid partnership that proved immensely successful in combating the flow of illicit narcotics.”

“Our embarked helicopters bring a tremendous capability to the ship, but only through the phenomenal teamwork between the Sailors of Gary and of HSM-49 does that capability really pay dividends,” said Lt. Cmdr. Chris Gzybowski, officer in charge of the detachment.

Following Gary’s return, the ship will begin to make preparations for decommissioning.

Joint, interagency and international relationships strengthen U.S. 3rd Fleet’s ability to respond to crises and protect the collective maritime interests of the U.S. and its allies and partners. U.S. 3rd Fleet leads naval forces in the Eastern Pacific from the West Coast of North America to the international date line and provides the realistic, relevant training necessary for an effective global Navy.