‘Verses for the Dead’ 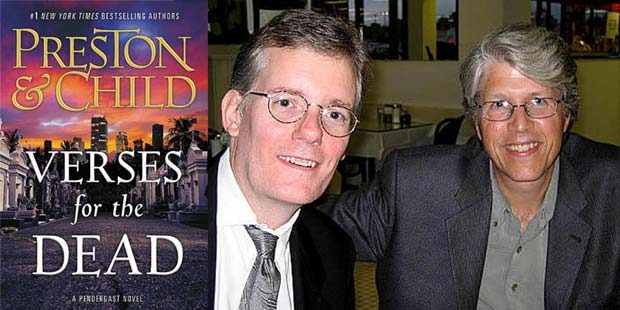 “Verses for the Dead” by Douglas Preston and Lincoln Child brings back the return of their beloved character FBI Special Agent Aloysius Pendergast. There is a slightly new recipe for this famous crime solver with a new boss, partner and medical examiner.

The authors describe Pendergast as “a person out of place and out of time. A gentleman from the Old South, specifically New Orleans. He is looked upon as a total freak. He does things off the books, unorthodox, wealthy and an iconoclast. He is like a twisted, dark Sherlock Holmes. We have fun writing him. He is an over the top character that is eccentric. He enjoys his comforts. He has become legendary to go rogue and work on his own.”

A welcome relief in this story has the authors moving away from anything supernatural and deciding to stick to crime-solving, understanding that the story and characters are riveting by themselves.

In this old-fashioned mystery, a Florida woman while visiting her husband’s grave has her dog find a human heart with an apology note. The current victims are women whose throats have been slit and breastbones split open to remove their hearts, all in quick and expert fashion. The killer leaves notes at the graves of women who committed suicide and sign them “Mister Brokenhearts.” As the body count mounts up it becomes apparent that the notes left have a tinge of literary verses from T. S. Eliot to “Romeo and Juliet.”

The authors noted that this time they gave him a different type of partner.

“One thread of previous Pendergast books is how we saddled him with lazy and incompetent law officials that he had to work with. Coldmoon is not a boring person and we hope he made an impression on the reader. He looks like a Native American with long black hair and piercing eyes. Quietly he shows Pendergast he is an equal with the same intelligence and observations. Pendergast as competent partner, he is one of the finest characters we have written. Very iconic that keeps to himself. One scene we wrote in the book shows their different tastes. Pendergast is a terrible coffee snob while Coldmoon likes camp coffee with that foul smell. At a certain point Pendergast buys his partner a fine expresso coffee. Coldmoon takes one sip and pours it out. This shows their differences, but they both end up respecting each other.”

Unlike his past supervisor, Pendergast must now deal with Walter Pickett, an FBI assistant director recently assigned to the New York City field office who is determined to keep this maverick agent under his control by assigning him a partner, Special Agent Coldmoon. The new partner is expected to report back on any of Pendergast’s deviations from the rules. Both Agents are a contrast of each other.

Coldmoon is part Lakota Indian and part Italian. Pendergast dresses like an undertaker, and always seems to have more money than the average FBI agent preferring the luxuries of a fine hotel, private jet, and nice car. Soon Coldmoon realizes his partner is astute, smart, observant, and has a way of looking outside the box. They enlist the help of the medical examiner who is willing to go against her supervisor to find clues.

Throughout the story the partners get under each other’s skins, but realize they are more alike than different.

“Pendergast only accepts one dollar a year because he is wealthy and is doing the job for the enjoyment of the work. He thinks of it as solving a puzzle. As the story progresses his new partner sees the reasons behind what Pendergast does. Regarding betrayal versus loyalty, Coldmoon is assigned as Pendergast’s partner with a secret agenda. As time passes he realizes it is wrong. He must choose loyalty to his superiors or loyalty to his partner. Whoever he is loyal to the other will see it as betrayal. He chose his partner.”

Sorting through betrayals, lies and deceptions, readers are treated to a unique storyline that is highly volatile. An added treat is the humorous banter between the characters that is both refreshing and amusing.