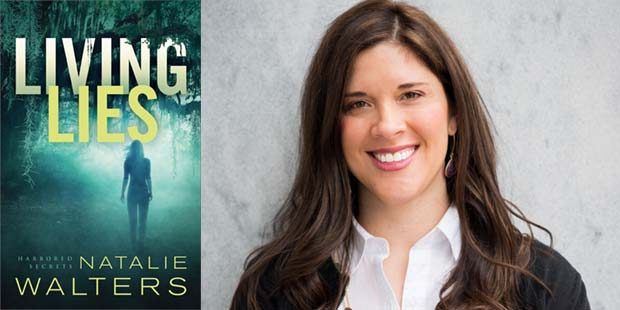 “Living Lies” by Natalie Walters brings to life the characters with an emotionally charged story. With thrilling suspense, threads of romance and important messages about removing the stigma of mental health and depression this book seems to have it all, including an action-packed crime mystery.

The crime revolves around murder, drugs, art and dealing with mental health issues. Lane Walton, widowed at the age of 28, journeys back to her hometown in hopes of a new start for herself and her young son, Noah. The small Southern town of Walton, Georgia, would seem like the place to begin again.

She is hopeful she can overcome her depression and to find acceptance. But life gets in the way, which happens after Lane discovers a dead woman. Needing to work with Walton’s newest deputy, Charlie Lynch, to uncover the truth behind the murder, Lane hopes that saving the life of another is worth the cost of revealing her darkest secret.

Struggling with depression she wishes the illness will not define her. Although depression affects countless people there is also a stigma surrounding it, in which many people suffer in silence. Her family’s lack of understanding isolates her further, making it harder for her to overcome the feeling that she is flawed. It’s a battle that often occurs daily and can be triggered unexpectedly.

This is why she can connect with a Vietnam veteran Miguel Roa, who is also suffering, but from PTSD. Also very potent is how readers share their journey and experiences, and are reminded how unfairly Vietnam veterans were treated when they returned.

This story has no shortage of action intertwined with messages about PTSD and depression. Readers will understand the harsh realities of life in this nail-biting crime novel.

Elise Cooper: Why the military angle?

Natalie Walters: I have a heart for those who are serving, since I am a military spouse for 22 years. I wasn’t just an author researching the military or law enforcement livelihood. I was the wife, daughter, granddaughter, sister and niece drawing details from personal history that have shaped me as a person that includes the hardships they have gone through. I wanted a military influence in my story, which is why I made the main male character, Deputy Charles Lynch, a former Marine.

EC: Did you know anyone who fought in Vietnam?

NW: I have three uncles who fought in the Vietnam War. One was injured and one is still haunted by memories. It’s not a war that I see often written about, and I used my character, Miguel Roa, to shed light on some of the more tragic effects of the war that I discovered through articles, documentaries, and family history.

EC: How did you come up with the mystery?

NW: I wanted something that would force Lane to reveal her truth. I used art since it helps those who suffer but can also be a catalyst for a crime. I reached out to a friend who works in the DEA. He gave me information of how people can smuggle drugs.

EC: Depression almost seems like a character in the book.

NW: At the time I was thinking of the story, our daughter was suffering from depression, suicidal thoughts and cutting. We never thought we would have to experience something like this in our lives. Writing this book became therapy for me. I pulled and drew upon from what was happening to our family and hopefully made it authentic to the story.

EC: How would you describe Lane?

NW: An introvert who grew up in a Southern socialite family with a tender heart. She grew up with depression but tries to keep it a secret because of the stigma surrounding it. She has internal strength that keeps her going as she fights to survive it daily. On good days she is not thinking about it, but on bad days it kind of manifests itself into her life. It sometimes gets to a point where it can be devastating.

EC: Did you live in a small town?

NW: Lane Kent’s story actually started in Northern Virginia, where our family was living when I first began writing her story. It wasn’t until our family was reassigned to Coastal Georgia that I really began to see the setting for “Living Lies” come to life. We once lived in a small town in Georgia 20 miles south of Savannah. I used the atmosphere to make the setting for this book. I wanted to make it realistic to the coastal Georgia region.

NW: Lane has some resistance because of her past. Charlie is very supportive of her. This allows Lane to open up with him. They help each other to gain confidence.

EC: How would you describe Charlie?

NW: They were a bit hard on the characters. They were rigid. I based Charlie’s dad on the fact he was a Marine. My dad was also a Marine and he had pretty rigid guidelines. Regarding Lane’s father, I based him on the mixed feedback we got from friends and family. Through her father, I wanted to show how it is a struggle for a lot of people to deal with depression. They need to learn they need patience instead of narrow mindedness. I had him transition as he recognizes that it is a treatable disease.

EC: What do you want the readers to get out of the book?

NW: An entertaining story with a good mystery. I want to remind those who might be suffering from depression or anxiety that they are not alone. They are seen, and have purpose, a reason to fight and live. My daughter did not want to tell anyone because she did not want to be a burden. But no one should have to struggle by themselves. Everyone has to be open, honest and compassionate. The reality is that many of us do not have perfect lives. I hope this story stays with readers long after they finished the book.

EC: The next book?

NW: It is titled “Deadly Deceit.” The story will feature Deputy Ryan Frost and the reporter Vivian DeMarco. Vivian has a person die in front of her, and then works with Ryan to find out what happened. They are a lighter couple than Lane and Charlie and like to play off one another. It comes out the end of the year.