Women in the Corps: 100 years of service 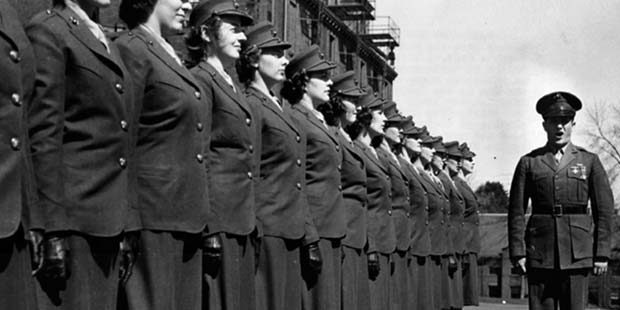 The 2018 Marine Corps Air Station Miramar Airshow, running Sept. 28-30, honors 100 years of women in the Marine Corps. Since World War I, women have served in the Marine Corps contributing to the U.S. victory of multiple wars, battles and conflicts. This year’s airshow is a chance to recognize the accomplishments of women Marines in the past 100 years.

On Aug. 13, 1918, more than 300 women stood in line to become United States Marines as World War I was beginning. Opha May Johnson, credited as the first woman Marine, stood in the front of that line and became the very first recruited into the Marine Corps. These women served in administrative fields as typists and stenographers. The recruiting process was very strict for women looking to join the Marine Corps at this time since they were required to already be skilled in working an administrative job to replace the men so they could be sent to support the war efforts.

Twenty years later, war broke out in the Pacific bringing World War II to its beginning on Sept. 1, 1939. The U.S. didn’t join the conflict until the Japanese attacked Pearl Harbor on Dec. 7, 1941. After the attack on Pearl Harbor, more than 18,000 women joined the Marine Corps. These women served as cooks, radio operators, exchange managers, stenographers and more than 200 other jobs. During this time, Capt. Anne A. Lentz became the first of 200 women to become a commissioned officer in the Marine Corps. Capt. Lentz, a former clothes designer, began working on Marine Corps uniforms when she joined, while other women were often put in charge of female Marines.

Following WWI and WWII, women Marines were processed out leaving only about 1,000 left in the Marine Corps. The men returned to their normal jobs and the necessity for women filling those billets was no longer needed. However, this soon changed. In 1948 Congress passed the Women’s Armed Services Integration Act. The act allowed women to become permanent personnel in the military.

In 1955, the U.S. joined its allies in conflict by supporting the South Vietnamese Army. On March 18, 1967, Master Sgt. Barbara Dulinsky voluntarily became the first woman Marine to serve in a combat zone and started a trend. Following in her footsteps, more than 30 other female Marines volunteered to serve in Vietnam from 1967 to 1973. After almost 20 years, the U.S. pulled their forces out of Vietnam in 1975, but this time the female Marines could keep their jobs due to the Women’s Armed Services Integration Act.

Aug. 2, 1990, marked the start of the Persian Gulf War and another milestone for women Marines and other service members. From 1990 to 1991, more than 40,000 women service members were deployed to the combat zone. In 1991, congress passed an act that allowed women pilots to fly in combat operations. Soon after, in 1995, Lt. Col. Sarah Deal was selected for Naval aviation training and became the first female Marine pilot.

On Sept. 11, 2001, the U.S. was attacked leading to the deaths of 2,996 U.S. civilians and more than 6,000 others injured. The attack led to the War on Terror, where both women and men fought side by side as Marines whether it be on the ground or in the sky. Since the War on Terror, Sgt. Jeanette L. Winters, Maj. Megan McClung, Cpl. Ramona Valdez, Lance Cpl. Holly Charette, Lance Cpl. Juana Arellano and many more female Marines have given their lives while deployed to the combat zone.

Women in the Marines and across the other services have played an integral and active military role in the success of every American conflict since WWI. It is a truly a national effort to ensure that our freedoms and way of life exist into the future, and we are stronger as we serve together, in peace and in war, as one people.

The barriers that these women Marines have broken is a reminder that each of us has a need and desire to contribute and serve.