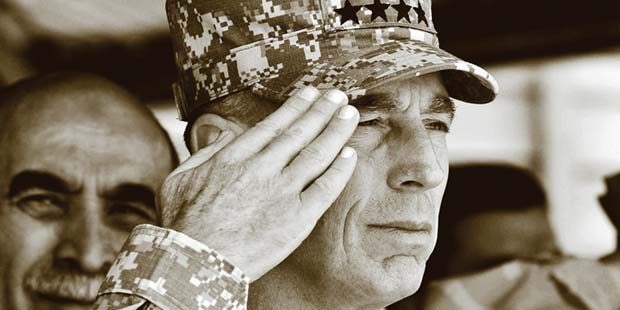 “We are engaged in a generational struggle,” says retired Gen. David Petraeus. “This is not the fight of a decade, much less a few years. This is going to go on for decades.”

Petraeus, the architect of the 2006 military surge in Iraq and former CIA director, spoke Nov. 28 at the Nixon Library in Yorba Linda at an event sponsored by the World Affairs Council of Orange County and the Nixon Foundation. In addition to taking questions, he covered a wide range of topics, including lessons the U.S. should learn from 16 years of war with Islamist extremism.

“We have to recognize that given the duration of this, you have to have a sustained commitment. That means, it has to be sustainable,” Petraeus said. “And that is measured in blood and in treasure.”

Petraeus, 65, said such a commitment has to be fully comprehensive.

“You cannot counter extremists like ISIS and al-Qaida and terrorists like that with just counter-terrorist operations,” he said. “You can’t drone strike or Delta Force raid your way out of this problem.”

“You can’t play Whac-A-Mole. You have to whack all the moles, all the time, everywhere.”

The general said it is important for the United States to continue to be involved in the Middle East.

“Ungoverned spaces in the Muslim world will be exploited by Islamist extremists,” he said. “It’s not a question of if, it’s a question of when and how significant. We have to do something about it. Las Vegas rules do not apply in these places. What happens there does not stay there.”

He added that, “The U.S. has to lead,” because no other country has the manpower and assets to spearhead coalitions to defeat groups like ISIS, al-Qaida and the Taliban. He also said the military has had to relearn, with success, how to wage such a battle.

“In our zeal to never do another Vietnam, we also threw out everything we learned about counterinsurgency,” he said.

“And even did away with some of the capabilities to actually carry out that kind of campaign.”

When he was tasked with writing the counterinsurgency manual for the military before the surge, he and other generals basically started from scratch, he said.

The next battle may be fought in cyberspace, Petraeus said, noting that that “keeps him awake at night.”

“It’s not just nation states, that we think we can deter,” he said. “The one that worries me, is Islamist extremists who will blow themselves up on the battlefield to take us with them, and I don’t know what deters them from hitting the send key if they ever get the cyber equivalent of a weapon of mass destruction.”

He said they could possibly shut down the U.S. electric grid and keep it down, which would be especially harmful during cold winters or natural disasters.

Vigilance is key, he said, even after 16 years of war.

“I don’t think you ever have a situation where you take the hill, plant the flag and go home to a victory parade,” Petraeus said. “I think, again, you’re going to have to have a comprehensive campaign that’s a test of wills. The Taliban famously said, ‘You may have the watches, but we have the time.’

“It’s really important to remember why we went there and why we have stayed. It’s always good to come back to the mission.”

Petraeus spoke about many other topics, ranging from North Korea, Syria, Russia and his leadership style.