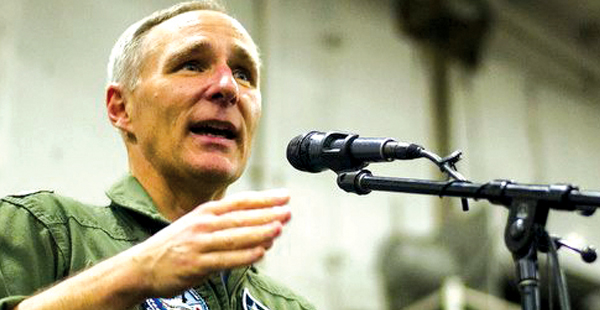 “I have the honor to serve with the best men and women in our Navy and have the opportunity to watch them grow and develop as sailors and leaders,” says Timothy Kuehhas, captain of the USS George Washington.

“I am continually impressed by their talent and skills.”

Kuehhas, who turns 50 this month, and his crew of more than 5,000 are returning to the United States after serving aboard the Navy’s only forward-deployed aircraft carrier at Yokosuka Naval Base in Japan.

The carrier is stopping in San Diego to swap about 60 percent of its crew with the USS Ronald Reagan before heading to Virginia this fall for nuclear refueling and overhaul. The Reagan is taking its place in Japan.

“San Diego is one of our most loved destinations,” Kuehhas said of he and his wife. “Although we have never lived here, we often flew down for family vacations during our time stationed at NAS Whidbey Island, Wash.”

A native of Sayville, N.Y., Kuehhas graduated from the University of Dallas in 1987 with a math degree before being commissioned as a Navy ensign in 1988. After flight training, Kuehhas was stationed at Whidbey Island, where he trained to become an electronic countermeasures officer.

Before taking the helm of the George Washington, he served as commanding officer of the USS Gunston Hall and was also the executive officer aboard the USS Abraham Lincoln.

His shore assignments have included serving as an electronic warfare instructor, primary briefer to the Joint Staff Directors and requirements officer on the Chief of Naval Operations staff.

The captain said an interest in naval aviation brought him to the Navy.

“I grew up on Long Island (N.Y.) back when Grumman, who was based there, built many of the aircraft flown off the carriers,” Kuehhas said. “So my exposure to naval aviation began at an early age. Although neither of my parents worked for Grumman, some of my friends’ parents did, so I had a Grumman calendar hanging in my bedroom every year.”

He and his wife have four children, two boys and two girls, ranging from 10-years-old to college-age. Their oldest, Matthew, attends Texas A&M University and is NRTOC in the Aggie Corps of Cadets. He will be commissioned next May.

“Traveling with our children is our favorite,” he said. “The dozen or so changes of station during my career have provided a wonderful opportunity to see our great nation together.”

He holds a master’s degree from the Naval War College in National Security and Strategic Studies and is a graduate of the Joint and Combined Warfighting School and the Naval Nuclear Power Training Command.

Additionally, he was the 1995 Association of Naval Aviation’s Naval Flight Officer of the Year for Tactical Aviation.

“What keeps me in is my admiration for our sailors,” Kuehhas said. “They work tremendously hard for many months away from their families, and they do it with pride.

“It’s an amazing experience to serve with them.”